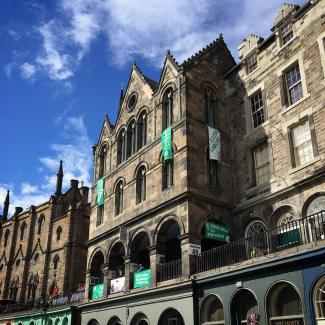 There has been an active Quaker Meeting in Edinburgh since the earliest days of Quakerism (which was born in North West England in 1652). George Fox visited Edinburgh in 1656 and was thrown out of the city for his pains, an experience to which he was accustomed.

You can see the eighteenth-century Meeting House in the south east corner of the Pleasance complex, now owned by the University of Edinburgh and used as a Festival venue. There are Quaker gravestones against the wall nearby.

We vacated that building during the last century, when our home moved to Stafford Street, in the New Town, before moving to the Meeting House in Victoria Terrace, where Central Edinburgh Quakers worship. A second Quaker Meeting was also started during this period, and now meets at the Open Door in Morningside.

The Victoria Terrace building, erected in the 1850s as an Original Secession Church, served as the Boys' Brigade HQ from the 1950s until Quakers bought it in the 1980s in order to meet their own needs and to serve the community. As part of this community involvement, we have run it as Fringe Venue 40 every year since 1989 providing vegetarian food and with a small theatre. Fringe visitors are welcome to worship with us.

The venue is run by Quakers. The staff include those who work here throughout the year and volunteers from the local and wider community, Quakers and friends of Quakers. All the profit we make from running the venue for three weeks goes to support charitable work. Our involvement in the arts is just one aspect of our wish to express our faith through engagement with and in the world.

We are not for names, nor men, nor titles of Government, nor are we for this party nor against the other ... but we are for justice and mercy and truth and peace and true freedom, that these may be exalted in our nation, and that goodness, righteousness, meekness, temperance, peace and unity with God, and with one another, that these things may abound.

All the quotations on this website marked 'QFP' are from 'Quaker Faith & Practice: the book of Christian discipline of the Yearly Meeting of the Religious Society of Friends (Quakers) in Britain'.  This is updated every generation in recognition of our experience that our understanding of truth moves on, a new revision has been started this year.

You can find out more about Quakers in Britain and Quakers in Scotland.

Venue 40 is run by the Quaker Festival Committee, an appointed committee of South East Scotland Area Meeting of the Religious Society of Friends (Quakers) in Britain.